When I first moved in, I phoned up BT in the afternoon to activate the phone line and they promptly woke me up by SMS at 6am the following morning to tell me the line was now active. That was the only communication I had with them for 3 months. They didn't even bother to tell me what my account number was so that I could register for online billing, until I received the first bill by post.

It's difficult to communicate with BT's outsourced email support. In 2008 it took several months to get them to remove my number from the phone book (despite laws against it there are unscrupulous companies who will just call up everyone to advertise their junk). It usually takes several attempts before someone who understands English properly deals with the issue.

During my time as a BT customer I have repeatedly received direct marketing by post, despite never agreeing to this. Usually it's advertising a 12 month auto-renewing contract for some free calls at an arbitrary time of day. Just send off the small bit of paper. Then, in April 2009 they sent me this waste of paper: 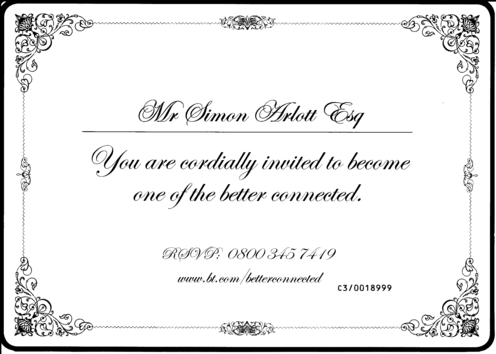 I complained threatening to raise the issue of pointless waste of paper with Watchdog and received a phone call within 30 minutes informing me that I would no longer be receiving marketing from BT (as requested). Unfortunately this statement (which I have recorded) was untrue.

In June 2009, August 2009, and October 2009 I received more direct marketing. For a company that claims to be environmentally friendly they waste a lot of paper on me. Under the Data Protection Act 1998 I have the right to prevent processing for purposes of direct marketing but BT appear to be unaware of this item of legislation. It has only been in existence for a decade, after all, and BT don't react that quickly (e.g. IPv6).

The marketing in October is interesting because it implies I'm using another supplier for outgoing calls. Which is partly true because analogue PSTN lines are difficult to interface with without introducing nuisance echo (BT won't provide VoIP services to non-BT-broadband customers), and I rarely make any calls. In fact I managed to not make any calls on the BT line for 2 quarters triggering an automatic (illegal) penalty charge for the FREE Caller ID service.

Trying to complain to BT by email used to work, and their forms have the option to communicate by Email or Phone. Despite selecting Email and providing an alternative contact phone number they insisted on bombarding me with missed calls from multiple numbers that I had to block.

After some attempts to get the charges removed from my bill (as an aside, BT cannot bill correctly either and once managed to miscalculate VAT causing them to deduct 2p more from my account than they claimed on the bill summary; their only way to fix this was to issue a 98p credit) I gave up and migrated my line rental to another supplier. It costs more per month (25p, now 21p after the VAT changed from 15% back to 17.5%) and I can't make chargeable outgoing calls (due to yet another part of BT being incompetent, because they're the monopoly provider and so it's effectively still provided by them) but they don't send me unwanted direct marketing.

BT refunded me for the charges and prepaid line rental (including the discounts for paper billing, which was a bit silly) but I had to email the CEO to get their attention because their standard support service just started ignoring me.

Problem sorted, right? I'm no longer a customer, they know I have requested that they do not use my personal data for direct marketing, so I should receive nothing more except a final bill. No. That would be too easy. Instead in November I received this: 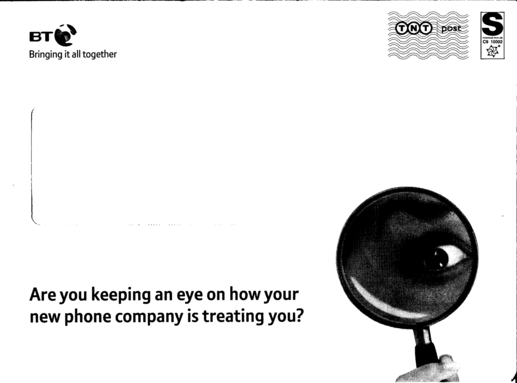 Which not only tries to market their services on A3-sized paper but defames my new provider (who they appear to think I've been with for 3 months already). Apparently I should watch out for "nasty surprises in the first bill".

This continues in December and then February the following year (I must have missed out on January marketing). No one else except TV Licensing is this persistent. I've contacted their Executive Level Complaints department requesting that my details are deleted, which is another right under the DPA principle that data should not be kept for longer than is necessary. I'm no longer a customer so they don't need my data.

If this doesn't work I'll need to raise a complaint with the ICO because I'll have run out of other options. Apparently terminating a contract without notice doesn't get their attention and they still want me to be a customer. I know the ICO have already had to deal with BT refusing to stop direct marketing to other people in the past.

This page is an archive of entries from February 2010 listed from newest to oldest.

November 2009 is the previous archive.