I've recently changed from a SATA SSD to NVMe SSD for my Windows PC and there's a format option for the NVMe SSD to use 4096 byte sectors for better performance. Changing this erases the contents and I had already copied everything to it so I had to use the SATA SSD as a backup copy. Shrinking the filesystem before starting helps here.

The EFI System Partition (FAT32) must be at least 257MB (65537 * 4096 bytes; normally 260MB) for a disk with 4096 byte sectors. I recreated this and copied the files for it. Windows is unable to modify the older 100MB partition configured for 512 byte sectors, even though it can boot from it. To be able to boot, the disk and partition GUIDs must be preserved when recreating the partitions.

The NTFS boot sector (at the start of the partition) contains references to the sector size of the disk. This is unnecessary information on more modern filesystems but NTFS is 28 years old. Changing the following little-endian values allows Windows to use the filesystem without needing to recreate it (instructions assume a 4K cluster size):

Windows doesn't appear to care if the "Hidden sectors" value is completely wrong (because I originally moved them around without updating it) or if the "Total sectors" is slightly larger than the previous size or the partition. 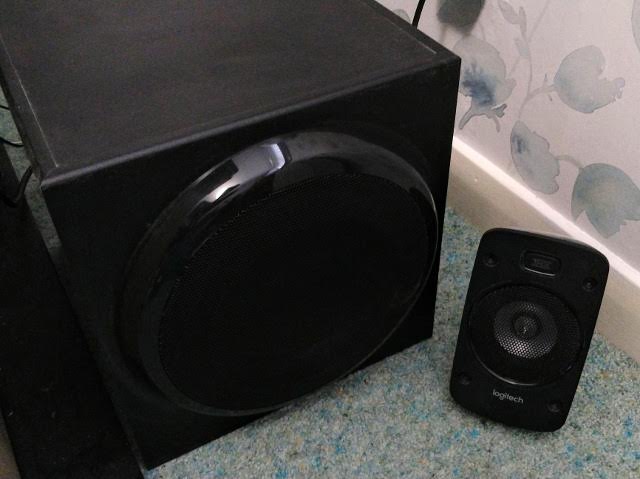 I bought these speakers before purchasing a standing desk because my existing speakers were attached by a fixed length cable. The cable had to be a certain length because the volume controls used capacitive touch all the way back to the amplifier/subwoofer.

These speakers have a separate controller console attached using a cable with a DE-15 connector so it can be extended with any VGA extension cable.

I turn the power on/off remotely with a keyboard shortcut but the speakers always turn on in standby mode. Having reverse engineered the protocol between the console and amplifier I could bypass this but the console itself would still not turn on. If it's not turned on then the volume control knob won't do anything.

By decompiling the firmware on the microcontroller inside the console I was able to find and modify a parameter that would make it turn on automatically when powered on. I also found a hidden feature to disable the automatic standby that happens after 2 hours and the procedure for enabling this (hold the "level" button for 5 seconds until the level change light goes out).

Full details on the interface, protocol and firmware access.

I've had problems with the HTC Vive Wireless Adapter overheating for a while and mounted fans on top of it which cooled it down but still had instability with sudden power outages. Moving the fans from the 5V output to the 12V input (so that it doesn't require any power from the wireless adapter itself) appears to have helped. 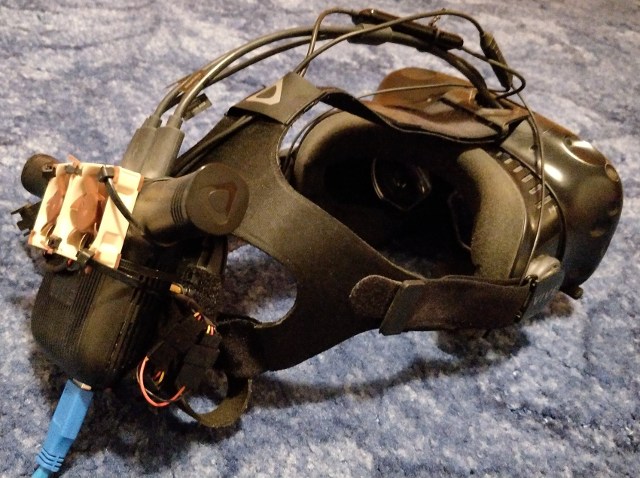 These smoke alarms look like they're as old as the house itself: 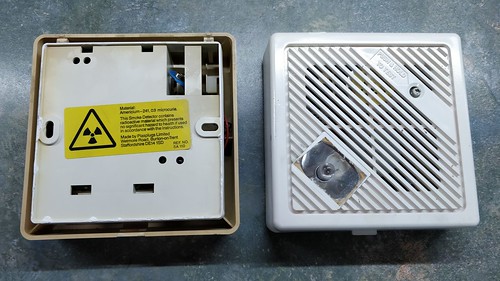 I put some other alarms up in 2015 and moved these ones into bedrooms but they were in need of replacing.

There are new minimum standards for fire alarms in Scotland that come into effect on 2021-02-01 that require interlinked smoke alarms in the main living area and hallways/landings as well as a heat alarm in the kitchen.

None of the other alarms are interlinked so I've replaced all of them with mains powered interlinked alarms. There's even a control panel to make the entire house start beeping or identify which alarm is detecting fire when it's not obvious: 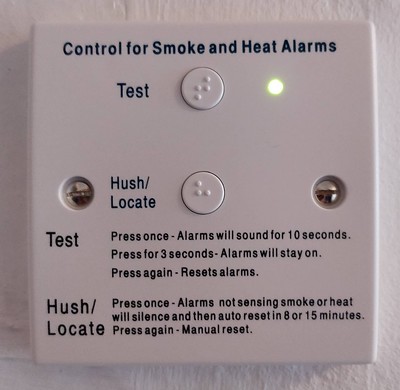 I'll automatically get an email if a fire is detected.

I'm just back from a holiday in Melbourne.

I've walked along the Yarra River, around Albert Park Lake, through the Botanic Gardens and been up to the Eureka Skydeck.

I visited Melbourne Zoo and went on a tour of the Great Ocean Road.

I went to all three days of PAX Australia at the Melbourne Convention and Exhibition Centre.

I attended a performance of Harry Potter and the Cursed Child at the Princess Theatre.

I took several photos and a few videos.

ASDA have applied some pre-Brexit shrinkflation to their own brand toilet paper "Shades So Soft". This time you get 10 fewer sheets per roll. That's 1¼ rolls less paper for the same price.

They're still advertising it as Bigger Pack Better Value but now it costs 5% more to get the same amount of paper.

The hot water in my house used to be provided by an immersion heater fed from a cold water tank in the loft (2 decades ago) and was distributed by 22mm pipe. When a gas boiler was installed the original pipes were left in place.

Having recently had the boiler replaced (with a higher maximum hot water output) I investigated what I could do to reduce the time taken to get hot water out of the tap and discovered that the 22mm pipes leading out of the cupboard went further than expected.

A 22mm pipe holds more than twice as much water as 15mm pipe so this results in a lot of unnecessary water in the pipes between the boiler and the taps. While this has little impact on the shower (mostly fed by newer 15mm pipe), it doubles the time taken for hot water to reach the tap in the sink because almost the entire run was in the old 22mm pipe (7 metres of it).

All of the 22mm pipes have now been replaced with 15mm pipes and the hot water now reaches the tap faster: 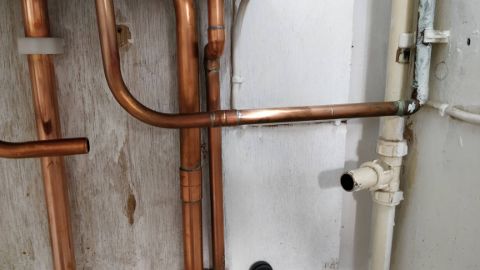 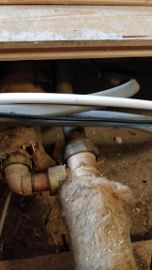 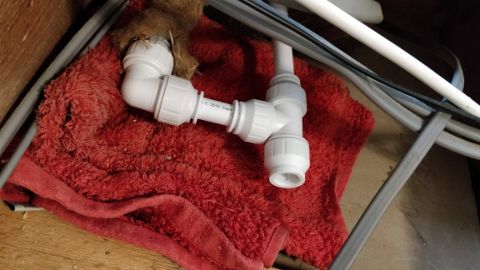 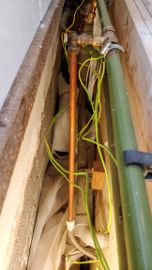 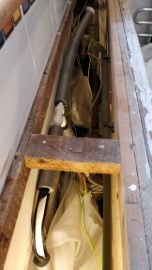 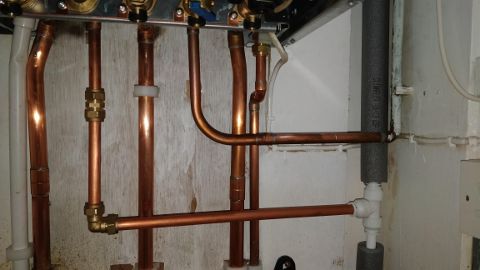 After 11½ years my paper shredder has finally given up. It's now very loud and doesn't work very well because it only has two teeth left on one of the gears: 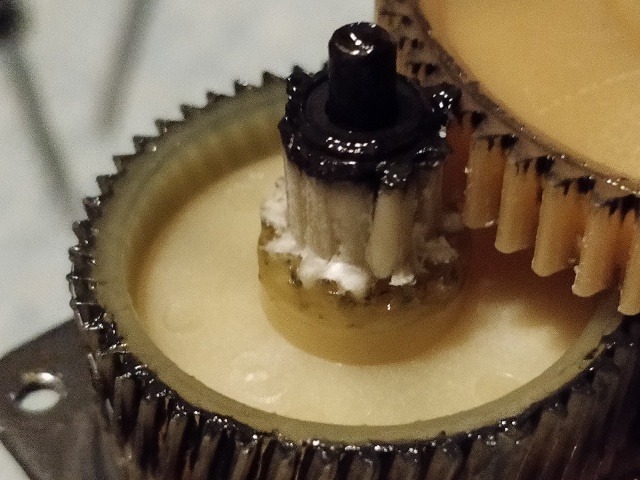 Prescription Lenses for the HTC Vive

I've been using prescription lenses with my HTC Vive for a year now and they're fantastic. Wearing glasses is really inconvenient because adjusting the position of them can require taking the headset off, and they usually overlap badly with the headset lenses (so there are parts at the side I don't see and parts above and below that I don't need to see). With lenses on my headset all I have to do is put the headset on and I have normal corrected vision of virtual reality with no loss of view.

I purchased them from VR Optician (previously VR-Lens.eu) and would strongly recommend them for anyone using VR who wears glasses. They fit on top of the Vive display and are easily removable.

A month ago I was on holiday in Brisbane. I arrived in the early evening so I got a takeaway and attempted to check into my apartment. This took about an hour because the out of hours key safe wouldn't drop the card and they had also managed to give the room they planned for me to someone else.

I went to Shorncliffe Pier and walked most of the way to Brighton along the coast. The suburb of Shorncliffe itself was almost deserted.

I walked the skywalk at Tamborine Mountain and along "Gallery Walk".

I spent a day at Currumbin Wildlife Sanctuary, taking lots of photos of Rainbow Lorikeets and walking around the Kangaroo enclosure.

I went to Redcliffe for a day trip to Moreton Bay with Brisbane Whale Watching. There were a number of whales around and I managed to get photos of them breaching.

On the last day I took a tour to the Sunshine Coast Hinterland & Noosa.

I took a few hundred photos and some videos. It was definitely worth the effort and space in my hand luggage to take my 100-400mm lens with me to get photos at the wildlife sanctuary and of the whales.