I finally got around to defrosting my freezer... it only took an hour to remove all the ice: 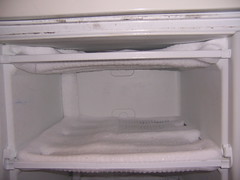 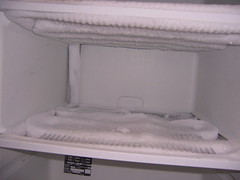 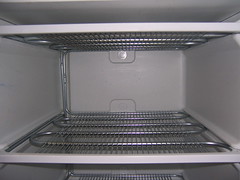 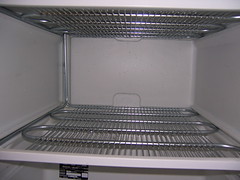 I have uploaded to Flickr around 650 of the 1000+ photos I took while in California. They're organised into sets by day with subsets of those for particular places. These are then all part of the September 2008: California collection. There are also some videos on YouTube.

Back home to Fife

I had a long wait before my flight to Edinburgh so I changed my remaining USD back into GBP and read my book for a few hours. The flight was then delayed another 45 minutes while they removed the luggage of someone who had failed to show up for their connecting flight. By this time it really felt like 4am and I was struggling to stay awake.

The flight arrived at 12:40pm and my bag appeared in time for me to catch the 1:20pm bus to Inverkeithing and then the next bus a few minutes later to Dalgety Bay, arriving home just after 2pm.

Back home to the UK

I got up early again and took another shuttle to LAX which took an hour, then another hour to get checked in and eat breakfast (an egg panini). Over an hour later the plane was ready for boarding and departed at 2pm. Some turbulence over the Atlantic Ocean and another two meals later, I arrived early at Heathrow around 7:40am. It's now tomorrow.

The Tonight Show with Jay Leno

Colin flew home in the morning so Thomas and I went to The Tonight Show with Jay Leno without him, after another visit to Universal City and lunch at the Hard Rock Cafe. We arrived just after 2pm to a line of under a hundred people and eventually got seated around 3:30pm for the show start at 4pm. They film it "live" without any editing or re-takes so we were finished soon after 5pm.

After waiting half an hour for a bus we eventually got back to the hotel and tried to meet up with Marie at The Grove for 8pm, but without a car this proved difficult. Two taxis with fare lights on refused to stop and when Thomas attempted to call for one they just transferred him to a number that didn't exist. We ended up getting a take-way from a Quizno's, where I had a tuna sandwich.

Jeff and Koen flew home today while myself, Thomas and Colin went to Universal Studios for the day (after a quick visit to the Dodger Stadium so Thomas could buy... a novelty baseball bat).

We went on the recently opened (this year) Simpsons Ride, got soaked on the (rather short) freefall waterfall of the Jurassic Park Ride, and various other events. Arriving late to the Terminator meant we got into the VIP section. They gave out free tickets to the next day's recording of the The Tonight Show with Jay Leno.

Dinner was at the Mariasol restaurant on the Santa Monica Pier where I had grilled salmon and they tried to sell us photos of us loaded with advertising for the restaurant itself.

Myself and Colin met up around 9:30am with Jeff and Koen at their hotel and then we went to the nearest The Coffee Bean & Tea Leaf, which smelled strongly of Coffee, to get breakfast (I had a chocolate croissant). We went to the Santa Monica Pier first and then on to West Hollywood and the Walk of Fame before driving through Beverly Hills, stopping briefly at the sign itself.

Lunch was some expensive pieces of chicken on sticks with cucumber and lettuce at the Hilton around 2pm. We then walked up the overlook by Runyon Canyon Park which would have been impossible without a car to reach before heading back to meet Thomas and Marie, who had been at Disneyland all day.

We had dinner at the Library Alehouse where I had a turkey burger with sweet potato chips in the dark, as it was getting late (after 7pm) and this place had plenty of Patio heaters but seemingly no outside lighting. Yet another visit to the Hilton for a couple of hours, where I got a good night time shot off the 4th floor balcony and some relatively uncommon $2 bills courtesy of Jeff.

Many banks stocking $2 bills will not use them except upon specific request by the customer, and even then, may cause a delay with a trip to the vault. --Wikipedia article

actually, when i got those bills for you the lady had to search for them and ask all her colleagues --Jeff

I woke up early at 7am and waited around to check out and get the shuttle to the airport. Airport security was uneventual, at least they don't only make some people take their shoes off, then the flight was delayed 20 minutes. This plane had more leg room than the previous flight. Arriving around 2pm it took another hour and a half to get to the hotel after going right around the airport looking for more passengers.

This hotel was much better than the one in San Francisco, larger rooms, beds, and it actually had an air conditioner (which I had assumed was just a heater for the first couple of days). We went to Jeff's hotel (the Beverly Hilton) which has an entire floor for the Lobby... until we went for dinner at the Palermo Italian Restaurant at 7pm where we met up with Marie and I had the Lasagne, ordering more of it than I could actually eat.

We went back to the hotel again for a few hours (it takes forever to get anywhere here with all the intersections).

After wasting most of the morning in the Hilton lobby waiting for people to appear we headed towards "AT&T Park" to watch the San Francisco Giants play the Pittsburgh Pirates. The game started just after 1pm and aside from a 10-run inning and Nate McLouth getting hit in the head with the ball it was mostly uneventful. And cold. The weather was unusually hot the past few days and there was a chilly wind coming in from the bay today. The Giants won 11-6.

This was the last day in San Francisco before flying to Los Angeles tomorrow and I hadn't been up Coit Tower yet, I quickly left with Thomas and Jared to visit it before the fog made it impossible. Buses always appear when you're about to give up and get a taxi. Once up there a queue quickly forms for the elevator back down, but we made it just in time to get a taxi to Jillian's Billiards at the Metreon for dinner.

Adrian and Crystal had arrived before us and got us a table, while Jeff, Koen, and Jeroen arrived 5 minutes after us. I had spaghetti with Italian sausage before we all left far too early shortly before 8pm, which is unfortunate as there were pool tables free. Plenty of time to re-pack my suitcase...

Getting up at 8am again (this jet lag goes away fairly quickly), I met up with Thomas, Jon and Alex at 10am and we went to the Zoo where there was a distinct lack of animals in most places. Jon went off on his own as he had a flight to catch mid-afternoon. We had lunch (Chicken burger) some time after 1pm at Bill's Place which has a nice outside patio area at the back.

Around 3pm we walked across the Golden Gate Bridge to Marin County and back. It took almost two hours to get from there to Pier 33 where we met up with Jeff, Koen and eventually Colin, Adrian and Crystal to get the ferry across to Alcatraz for the night tour.

They give you headphones for an audio tour which goes very slowly and makes it easy to lose track of where you are on it. Most of us stayed until the last ferry back. Thomas, Colin and I then met up with Jeff, Koen, and some friends of theirs at a place called Mars Bar around 10:30pm until closing time.