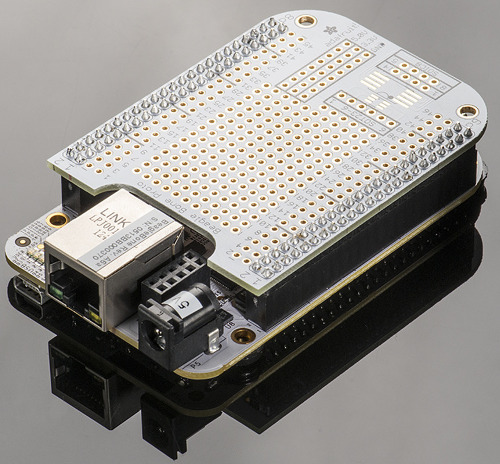 I bought one of Adafruit's Proto Cape Kit for my Beagle Bone Black so that I could put 3 relay circuits and pin headers on it. The double-sized PCB is supplied with separate pin headers that you have to solder on yourself.

It provides access to all of the pins but only SYS_5V is provided as a set of power lines and not VDD_5V, so limited current is available. However, this doesn't matter too much given that there is very little space for components.

I had to really squash everything in and use a lot of wires because there was no chance of creating an optimal layout: 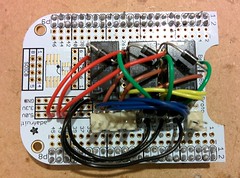 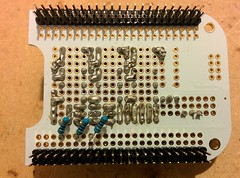 Posted in Computing on February 5, 2012 at 15:15
My new server case doesn't have a very visible power button and I don't want the reset button being pressed instead... some careful application of white correction fluid makes it easier to see: 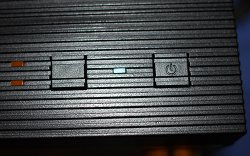 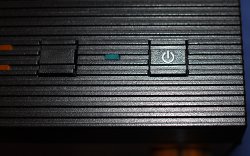 Three different eBay sellers have all sold me USB Bluetooth adapters (at costs varying from very-cheap to brand-name-premium) with duplicate addresses*. I'm currently waiting for the third one to stop ignoring the law (and me) so that I can return the most recent purchase.

I was ready to give up and decide it was now impossible to buy genuine Bluetooth devices that comply with the Bluetooth Specification when I tried purchasing some Belkin adapters from Amazon, and it turns out that despite the increased cost these actually have unique addresses.

* Bluetooth adapters with duplicate addresses means that if you happen to be using your adapter within range of someone else who got theirs from the same manufacturer's batch, you'll get conflicts accessing devices because there will be two devices on the network with the same address. Avoid Dynamode and cheap unbranded devices.

Every cheap "Serial to USB" adapter I can find uses a PL2303 chip with active low signaling, which isn't the same as a real PC serial port. Fortunately FTDI sell real adapters. The US232B has 9V high, -9V low outputs and its inputs are open low at 0V.

Fortunately it is possible to insert your own root certificates, such as the one provided by CAcert who issue free code signing certificates.


Using signed MIDlets, I can finally set some of the permissions to "Never Ask" and avoid irritating prompts. 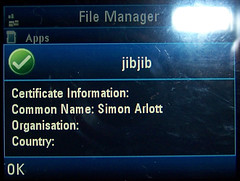 I had an unused Mini-ITX computer which I can make silent (by removing the fan) as long as it isn't doing anything too intensive, and some spare speakers from a broken CD player... so I put together some remote speakers to play music on.

With some cheap bamboo cane and tie wraps I've mounted them at the head of my bed. The server boots over the HomePlug network allowing MPD to connect to it. I'll add a wireless remote control soon. 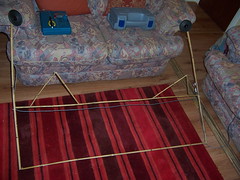 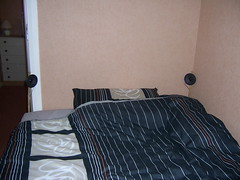 It's close to two months since I decided to replace proxima's aging hardware and two returned motherboards later I finally moved everything over on friday. It's much faster.

It's also been snowing tonight... started soon after I left for Tesco :/.

My new printer is here... but it doesn't come with a USB cable so I can't use it yet :(

ASDA are selling young boys for £5!

This page is an archive of recent entries in the Computing category.

California is the previous category.

Consumer Products is the next category.